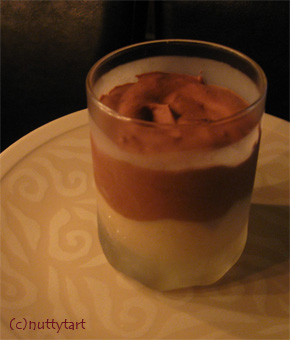 A wonderful frozen, make-ahead dessert for chocolate lovers. This recipe was developed by Ms. Henna Ström and it won 1st prize in a chocolate recipe competition organised by Kodin Kuvalehti magazine, almost a decade ago. I’ve had the recipe in my collection ever since and was reminded of it by this month’s We Should Cocoa challenge (by Choclette of Choc Log Blog and Chele of Chocolate Teapot) where this year’s Christmas theme is chocolate & cinnamon. The recipe is delectable, and really quite elegant! Next time I will make more layers though: I had to wait a while before I could dig through into the cinnamon layer and I would prefer to get a bit of both flavours with every spoonful. 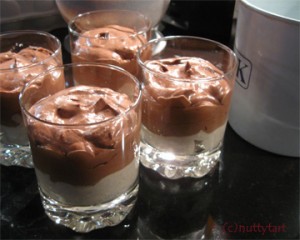 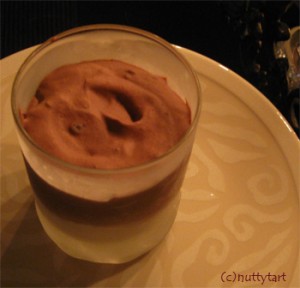 Layer the two mixtures into four small drinking glasses (or other freezer-safe vessels of your choice) and place in the freezer until frozen. Do not keep in the freezer for days – the texture will suffer.
Bring to room temperature some 15 minutes before digging in (longer if the parfaits have been in the freezer all day).

You can, of course, multitask and make the two flavours simultaneously: melt the chocolate while making the sugar syrup, and mix the syrup/yolk mixtures at the same time (but in separate bowls, of course!

). I’ve listed the directions separately to make it (hopefully!) clearer to see which ingredient goes where.

Dear people who await the end of the world,

1) To those who fret: please stop worrying over something that you cannot control. You might as well worry that you should be able to control your local weather, and you don’t, because you know you can’t.  If the world does come to an end, the world comes to an end: there would be nothing you could do about it because it would be a Pretty Big event. Also, save that suicide plan until the very last minute – when your end-of-the-world induced death is imminent – on the very-probable-off chance that you’re wrong, and you would in fact be alive, well and pretty relieved on December 22nd.

2) You folks who are digging bunkers under your house and hoarding canned food: just what kind of a lame ass end of the world is it exactly, if you’re fine as long as you stay in a bunker with canned food? An end of the world that couldn’t commit? Pfft.