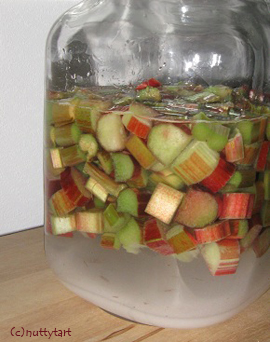 It’s rhubarb season, and I shall now present to you the best way to use rhubarb. I kid you not, this stuff is better than anything you can bake with rhubarb, and this coming from a lover of all things baked. Rhubarb vodka is amazingly delicious, and works both as a shot and as a punch or cocktail ingredient. It’s also so simple to make that you really have no excuses not to try it! I originally found the recipe on Food.com, posted by spicyspiral. It’s the only recipe they’ve posted, but when you post a recipe this good, there’s no need for more, really. Man, I love this stuff.

My one caution with this recipe is this: only make it with the crisp, tender, fragrant stalks of early summer. They will give you the tastiest vodka with a vibrant, red colour. Last year, we made a batch with the woodier late harvest stalks… which resulted in an orangey, dull and slightly bitter-tasting drink, and we are still trying to figure out ways to turn it into something usable!! (Hints welcome!) So: do it now! Put some rhubarb and sugar into vodka!

Divide chopped rhubarb and sugar between the two jars.

Pour 500 ml of vodka into each jar. Close lids tightly, and give the jars a good shake.

Store the jars in a cool, dark place for at least 2 months (we do 3), and shake them a few times a week.