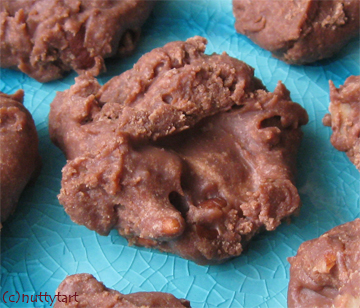 This month, Choclette’s We Should Cocoa teams up with Belleau Kitchen’s Random Recipes! This was great news, as I’ve been lamenting the fate of all of my cookbooks – they sit on the shelves, unused, while I browse for recipes online. It was high time to put at least one of them to good use!

My selection process ran as follows: sit in front of cookbook shelves and, starting from the top left, count to the 77th cookbook; select the 7th recipe in the book starting with the word chocolate. The lucky book #77 was a book on Creole, Cajun and Mexican recipes by Mirjaliisa Nuuttila and Elinor Schildt (from 1993), and the index only had one recipe that started with the word chocolate. So, Chocolate Pralines it was!

Now, Finns have traditionally sucked at writing recipe instructions, and the recipe instructions of this recipe did kinda suck*. They tell you to boil sugars and cream “into caramel”, add chocolate and nuts and boil “for a minute or two”. There is no mention of what to do with the butter that is included in the ingredient list. A bit too random, for my tastes. (Security-seeking, I am.) Soo… having at least taken a cookbook out of the shelf and found an ingredient list, it was back online to see if I could find more specific instructions regarding what I was supposed to do with the ingredients in order to end up with pralines.

But, there was random chocolateness to be made, so I pushed my worries aside and made Chocolate Pralines with pecans. They are pretty divine: like delicate, cloudy fudge. The fudgey part literally melts in your mouth, and because pecans are fragile and airy, the whole confection has a wonderfully light mouth feel. These are altogether too easy to eat!

Chocolate Pralines (makes 40-50, depending on how big you make them)

Line a baking sheet with foil or parchment paper.

In a large saucepan (the mixture will bubble up!), combine white sugar, brown sugar, cream and salt. Attach a clip-on candy thermometer to the side of the pan.

Remove the pan from heat and drop the butter and chocolate chunks on top, but do not stir. Allow the pan to sit for one minute.

Add chopped pecans and vanilla and stir with a wooden spoon. Continue stirring smoothly (not beating!) until the mixture begins to thicken, becomes lighter in colour and begins to hold its shape. This doesn’t take long: do not overstir, as the mixture goes from fluid to hard pretty quickly!

Drop by spoonfuls onto the prepared baking sheet. If the mixture stiffens before you have formed all the pralines, stir a tablespoon of hot water into the mixture to loosen it again.

Allow the pralines to set at room temperature.

*This is not to fault Mses Nuuttila and Schildt, whose cookbook is fantastic and got a lot of action in my kitchen in the 90s! It really is a kitchen cultural thing – this is how most Finnish caramel/fudge recipes would get written, because it would be assumed that you know what you’re doing. I, for the most part, have no idea.